What are IFLA’s activities in Turkey? How can libraries be active supporters of the Sustainable Development Goals (SDGs) through their role in providing access to information? How could libraries be encouraged to work towards that direction? What is the focus work area of the new Europe Regional Division Committee and how relevant is the Library Map of the World? IFLA President Barbara Lison and IFLA EU RDC Member, Ertuğrul Çimen will dive into this exciting discussion moderated by Tuba Akbayturk Canak. Stay tuned! 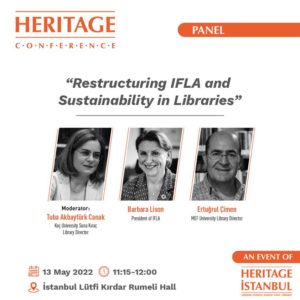 Barbara Lison is the IFLA President. Since almost 30 years Barbara has been working as Director of the Public Library system of Bremen, one of the largest public library systems in Germany. She is an educated librarian with university degrees in Slavonic studies, History and Educational theory. Besides her duties in Bremen library Barbara has been actively advocating for libraries on national and international levels. She had several offices in different library related associations, having served as President of the German Library Association, dbv, and President of Bibliothek Information Deutschland, BID, the national umbrella organisation of German library and information associations. She has also held leadership positions in the European Bureau for Libraries, Archives and Documentation Associations (EBLIDA), including Executive Committee member and Vice-President. She has been a member of IFLA´s Governing Board, held the position of Treasurer and IFLA President-elect. Her term as IFLA President is from August 2021 to August 2023. She is an expert on any aspect of the management of libraries, especially innovation, HRM, customer orientation and change management.

Ertuğrul Çimen has a BS from Hacettepe University Faculty of Literature, Librarianship Department, and a MA from Kadir Has University, Social Sciences Institute, Finance, and Banking Program. His current position is the library director of MEF University. His professional interests are academic library management, library consortiums, license agreements for e-resources, library collaboration, resource sharing, and document delivery, lifelong learning, and staff exchange programs for librarians. He has an active role in NGOs and professional organizations at the national and international levels. He is the former president of Anatolian University Libraries Consortium (ANKOS) and a former executive board member of the Turkish Librarians Association (TLA). He has been serving as a member of the IFLA Europe Regional Division and the member of the IFLA Freedom of Access to Information and Freedom of Expression (FAIFE) Advisory Board. He is the editorial board member of the Interlending & Document Supply journal (Emerald Publishing) and the International Journal of Knowledge Management and Practices (IJKMP).

Tuba Akbayturk Canak has been working in academic libraries for over 24 years in different capacities. She started her career as a systems librarian following her graduation from Indiana University with an MLS. Currently, she works as the library director position at Koç University which is one of the most prominent universities in Turkey.  Within the scope of this position, she manages 5 libraries in 3 different cities in the country. Collection development, e-resources management, library automation, resource sharing, and scholarly communication are some of the areas she is responsible for. She has been actively involved with the Turkish national university libraries consortium (ANKOS) governance, including as its President between 2016-2018. She is an active advocator of open science in the region. She serves on various national, regional and international advisory boards. She is a member of the IFLA Document Delivery and Resource Sharing Standing Committee.