IFLA’s core message at MONDIACULT 2022 was a call to policymakers, including ministers of culture from around the world, to look to library associations and 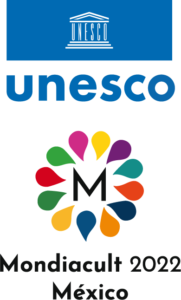 institutions as partners in realising the potential of culture to leave no one behind. We stressed that, through its transversal impact across the development agenda, culture is critical for achieving sustainable development goals.

In order for culture to fulfil this potential, policymakers must uphold an inclusive, rights-based approach with meaningful access and participation as core values.

As libraries champion access to information and culture, enable public participation, community-building, and the acknowledgement of the cultural knowledge that each and every member of society can offer, they are natural partners and much be engaged with, supported, and protected.

This message was at the heart of the intervention made by Jonathan Hernández-Pérez, Researcher at the Library and Information Research Institute (IIBI-UNAM), and member of IFLA’s Governing Board, during one of the conference’s thematic sessions.

This strong message, delivered to an audience of decisionmakers and ministers from around the world, also echoed colleagues from the Culture 2030 Goal Campaign in calling for a stand-alone culture goal, ensuring cultural sustainability for the wellbeing of all, in the post-2030 development agenda.

Find out more about a stand-alone culture goal here: A Culture Goal is Essential for our Common Future [pdf].

IFLA on the MONDIACULT 2022 Agenda

This historic conference, convened for the first time since 1982, brought leaders and stakeholders together to shape a more robust and resilient cultural sector – enabling it to fulfil its potential to drive progress on sustainable development.

IFLA was delighted to have an official role in MONDIACULT 2022 through the organisation of the side event, “Accelerating Education-Culture Linkages through Collaboration: Exploring partnerships with libraries and other cultural institutions”, moderated by Mr. Hernández-Pérez and coordinated by Claire McGuire, IFLA Policy and Research Officer.

We were excited to be joined by members of the delegations from the United Arab Emirates and Aotearoa New Zealand, as well as experts from Guadalajara University, the Mexico City Secretary of Education, Science, Technology, and Innovation, the National Library of the Netherlands, and the Ghana Library Authority.

We were also delighted to work with the German Commission for UNESCO to facilitate the participation of a youth expert from Mozambique, representing the NGO Observatory of Cultural Policies in Africa (OCPA). 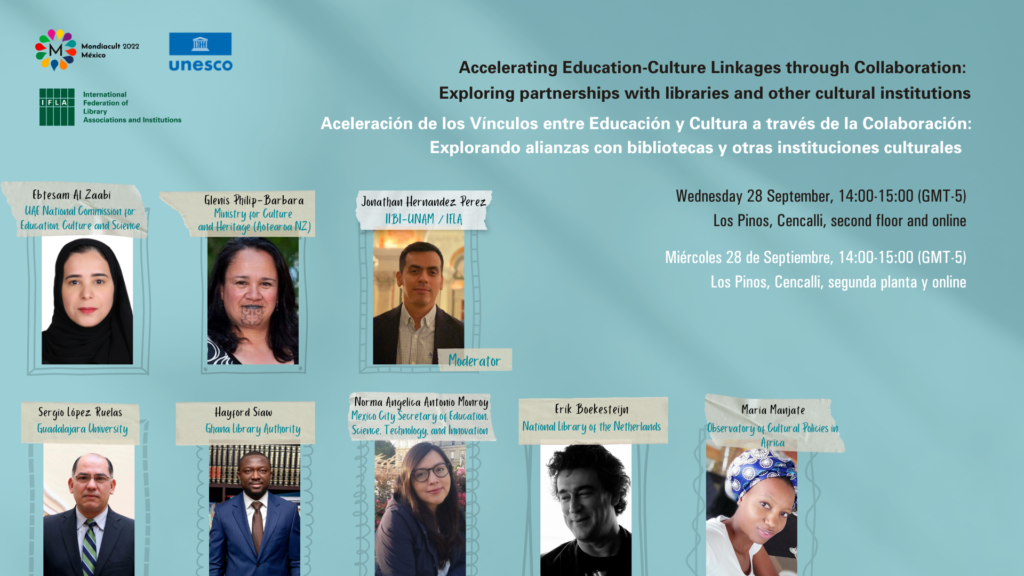 During this event, there was broad recognition of the importance of culture and arts education, both in schools and more broadly within communities.

The UAE was represented by Ebtesam Al Zaabi, International Organizations Expert, UAE National Commission for Education, Culture and Science. This country has led the effort at UNESCO for the adoption of a Framework for Culture and Art Education, and Ms. Al Zaabi stressed that intersectoral synergies and partnerships have been crucial to realise culture-education linkages in practice. The UAE will further lead the effort to elaborate these linkages is an upcoming world conference on arts and culture in education, supported by UNESCO, which they will host in 2023.

An indigenous perspective on the intersection of culture and education was offered by Glenis Philip-Barbara, Deputy Chief Executive – Delivery, Ministry for Culture and Heritage of Aotearoa New Zealand. She stressed the intersection of culture with the land and with language. She noted that schools have been used to strip Indigenous people of their culture, especially through preventing the transmission of indigenous languages. There is a strong need to reconcile this past, to ensure that the knowledge can be transmitted, and can bring value to individuals, families, and communities.

Ms. Philip-Barbara opened her address with a song sung in Te Reo Māori (‘the language of Māori’), watch online here.

Erik Boekesteijn, Senior Advisor, National Library of the Netherlands, shared information on an innovative Dutch model, in which the National Library partners with the public library system to promote literacy, reading, and access to culture and the arts, also through engagement with the formal school system.

Hayford Siaw, Executive Director, Ghana Library Authority, elaborated on these innovative examples, stressing that libraries do not need four walls to bring these values to their communities. He shared an example in which library vans could connect with communities that may not have access otherwise. This not only enabled access to books and other materials, but to the internet and information in a broader sense.

The need for intergenerational cooperation and exchange was finally highlighted by Maria Manjate, Programmer Officer, Observatory of Cultural Policies in Africa (OCPA). There is a transversal need to engage youth voices in facing challenges and in elaborating solutions.

It was noted that libraries and other cultural institutions need support in order to carry out this work. Taking a broad view of these institutions and the value they bring to multilingualism, cultural diversity, cultural participation, and cultural education would have a mutual benefit – helping policymakers deliver on goals of integrating culture in sustainable development, while also supporting those institutions who are connecting the multitude of values that culture brings to all members of society.

A summary of this side event was shared with all conference delegates in the plenary closing session, with the call to partner with libraries being reiterated.

IFLA took part in three other side events alongside partners from #Culture2030Goal and the Climate Heritage Network.

Ahead of the start of MONDIACULT, IFLA joined colleagues at the historic Colegio de San Ildefonso to present and discuss a Zero-draft of a future Culture Goal. As a part of the Culture 2030 Goal Campaign, IFLA had a role in the conceptualisation and drafting of this draft.

Read the Zero-draft here: A Culture Goal is Essential for our Common Future [pdf]

Organised by the Canadian Commission for UNESCO, the University of Toronto, Arterial Network, Culture Action Europe, ICOMOS, IFCCD, IFLA, IMC and the UCLG Committee on Culture.

This event explored a new #CultureForSDGs Toolkit, developed by a working group convened by the Canadian Commission for UNESCO, alongside the Culture 2030 Goal Campaign’s Zero-draft of a future Culture Goal. IFLA responded alongside colleagues in a discussion on why a culture-specific goal is critical.

Find out more about this event here: Concept Note [pdf].

This event, which was coordinated by Claire McGuire, IFLA Policy and Research Officer, brought experts from across the culture sector together to advance understanding of how cultural policies can best help tackle the global challenges of climate change and loss of biodiversity, and build consensus as to priorities with a call for more robust action.

CHN was delighted to be joined by Barbara Wolfensberger, Director-General for Culture and Media at the Ministry of Education, Culture and Science, the Netherlands, who responded to these calls with action that the Dutch government is taking to recognise culture in climate policy and climate in cultural policy.

Video recordings of all official side events will be made available soon.

The MONDIACULT Declaration for Culture

The key outcome of the MONDIACULT 2022 Conference was the unanimous adoption of the Mondiacult Declaration for Culture on Friday 30 September.

This Declaration affirms that culture is a “global public good” and includes a call for culture to be included “as a specific objective in its own right” in the next United Nations sustainable development framework.

It builds on a foundation of culture’s role in upholding universal human rights, namely cultural rights. This especially highlights intersections with the rights for indigenous communities to safeguard and share their ancestral knowledge, and the protection and promotion of cultural and natural heritage.

The essential role of libraries is acknowledged in underlining the importance of enhancing synergies between culture and education. The Declaration notes the need for context-relevant education, drawing from cultural heritage and traditional knowledge. This is required to improve learning outcomes and strengthen appreciation for cultural diversity, multilingualism, arts education and digital literacy – both within the formal schooling system and in support of lifelong learning.

IFLA called on national stakeholders to build upon this declaration, integrating the role that libraries have across all its points – including in policy and action to protect cultural property during crises. We further called on ministers to consider UNESCO’s 2015 Recommendation on the preservation of, and access to, documentary heritage – including in digital form – alongside UNESCO’s cultural conventions and support its implementation.

This offers a new range of opportunities for library stakeholders at the national level to engage with their national authorities in the implementation of the MONDIACULT Declaration, and in reporting on the role of libraries in driving forward meaningful progress.