Librarians Association of Malaysia Role in Supporting the UN SDGs

Persatuan Pustakawan Malaysia (PPM) was established on 6 June 1955 as the Malayan Library Group (MLG). Throughout the years, MLG went through several name changes and in 1998, it was officially known as Persatuan Pustakawan Malaysia (PPM) or the Librarians Association of Malaysia. In September 2015, the world leaders who attended the UN Summit adopted the United Nations Sustainable Development Goals (SDGs) 2030. On 1 January 2016, all 17 SDGs officially came into force. Subsequently, the United Nations stated that:

IFLA, the International Federation of Library Associations and Institutions will work with our members, including library associations and institutions in 150 countries, to ensure their readiness to support implementation of the SDGs in their country and locally through library services and programmes, including public access to ICT. Libraries provide an essential means of reaching the next billion by supporting digital inclusion through access to ICT, and dedicated staff to help people develop new digital skills.”
SOURCE: sustainabledevelopment.un.org

With a view of promoting the importance of the SDGs and how Malaysian libraries can support work towards the SDGs in Malaysia, PPM responded accordingly. PPM had in place a number of programmes on SDG-related matters for 2020. These programmes were planned not only to create awareness among its members, but also to encourage and help members to lend their support to the SDGs. However, the COVID-19 pandemic put a stop to most of the face-to-face programmes. Fortunately, PPM, through its members, was still able to run a number of programmes successfully.

On 20 January 2020, PPM organised a one-day workshop on Malaysian Librarians Contributions to the United Nations Sustainable Development Goals in conjunction with the Petronas Resource Centre. The Workshop was attended by 41 librarians from various libraries in Malaysia. For the first part of the Workshop, Ms Tay Ai Cheng, a Member of IFLA’s Governing Board, spoke about IFLA and IFLA’s involvement with SDG 2030. She emphasised the importance of Malaysian libraries and librarians to play an active role in the SDG 2030 Agenda. She went on to elaborate on IFLA’s Library Map of the World, which features various SDG stories. She encouraged Malaysian librarians and libraries to write about their activities and services that support any of the 17 SDGs. The second part of the Workshop focused on IFLA’s SDG Stories and IFLA RSCAO’s SDG Stories. Dr Nor Edzan Che Nasir, IFLA RSCAO’s Secretary and Member, facilitated the workshop. She showed the participants the differences between the two and instructed them on how to submit their SDG stories to either one or both. 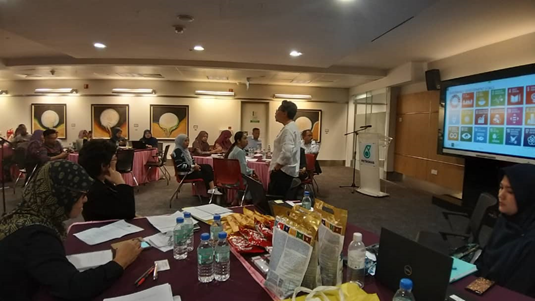 2. Webinar on “The Library Leaderships’ Role in Supporting the SDGs”

On 15 October 2021, Dr Nor Edzan Che Nasir, IFLA RDC-AO Secretary and Member was invited to be a presenter at a webinar for the Excellent Leadership Programme. The programme was jointly organised by the Higher Education Leadership Academy (AKEPT) of the Ministry of Higher Education Malaysia and Universiti Tun Hussein Onn Malaysia. The target audience was the chief librarians and deputy chief librarians of various Malaysian universities. The talk centred on the role library leaders can play in organising and supporting SDG-related programmes. It also emphasised on the need for these SDG-related stories to be documented and archived in the SDG Stories of IFLA’s Library Map of the World.

Realising the absence of a story from Malaysia in IFLA’s SDG Stories, PPM invited Ms Kristine Paberza-Ramiresa, IFLA’s Member Engagement Officer, as a guest for a webinar on 20 November 2021. Ms Kristine Paberza-Ramiresa talked at length on the why, what and so what of the SDG stories. She elaborated on the importance of writing a story that has a profound impact on the target group. To date, Malaysian librarians have submitted five stories, but these stories need to be further expanded. The webinar was officiated by Datu Dr Rashidah Bolhassan, the President of PPM and was moderated by Dr Nor Edzan Che Nasir, IFLA RDC-AO Secretary and Member.

4. Compilation of Data for IFLA’s Library Map of the World

Throughout the years, PPM has been working working closely with the National Library of Malaysia (PNM) to collect and compile data for Malaysia’s country profile in IFLA’s Library Map of the World. Ms Chin Loy Jyoon, the Secretary and Member of IFLA’s Management of Library Association Section, has been working together with librarians from PNM for this. 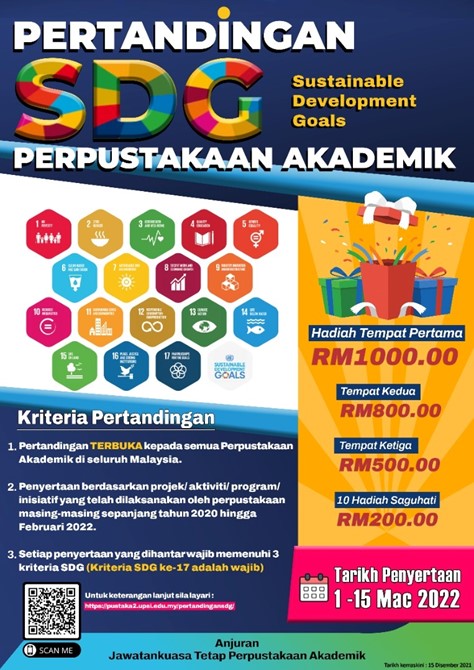 PPM’s Standing Committee of Academic Libraries and the Tuanku Bainun Library of Universiti Pendidkan Sultan Idris are jointly organising an SDG-related competition for all academic libraries in Malaysia. The competition will run from 1 March to 15 March 2022 and is opened to all Malaysian academic libraries. The academic libraries must submit a report of an SDG-related activity/programme/project that took place from 1 January 2020 to 28 February 2022. To qualify for the competition, the activity/programme/project must touch on at least three SDGs, with SDG 17 as a mandatory inclusion. Cash prizes will be awarded to the three main winners and ten consolation winners.

The Tun Seri Lanang Library of Universiti Kebangsaan Malaysia has invited Dr Nor Edzan Che Nasir, IFLA RDC-AO Secretary and Member for a talk on 8 February 2022. The talk foucused on the SDGs, Library Map of the World and SDG Stories.