Bringing the Voice of Libraries to COP26

The UN Climate Change Conference (COP26), hosted by the United Kingdom in Glasgow, has come to an end.

IFLA was there to ensure that a library perspective was included in the programme both for governments and other delegates, and to amplify the work that libraries are doing to empower their communities to take climate action.

IFLA was proud to join the Climate Heritage Network in a series of events that brought the voices of cultural heritage and cultural institutions to the table – highlighting the sector’s critical role in powering climate action.

In the end – the goal to limit global warming to 1.5 degrees C. above pre-Industrial levels still stands – but on shaky legs. More than ever, leaders must take more ambitious steps to mitigate the climate emergency. This must be done in a just and inclusive way – in which all people are empowered to participate in climate action. Libraries can help make this possible.

Ministers from around the world came together to discuss a pathway towards fulfilling the goals of the Paris Agreement – a legally binding international treaty on climate change adopted in 2015. Although some important progress has been made, many have underlined that more drastic work must still be done to address the climate emergency.

The key objective of COP26 was to secure global net zero emissions by 2050, in order to limit global warming to 1.5 degrees C. above pre-industrial levels, as per the Paris Agreement. From the 151 countries who submitted new climate plans to decrease emissions by 2030, the UN estimates that the world is on track to limit warming to 2.5 degrees C. While this is positive progress, it is clear that it is still not enough to mitigate the climate-related threats that are urgently facing some of the world’s most vulnerable populations.

The Glasgow Climate Pact calls on countries to increase their ambition and calls on them to come to COP27 (2022) with stronger emissions reduction targets.

Leaders must be ambitious to reach this target by next year. Involving citizens in calls for bold action will play an important role.

The Importance of Partnership

The Glasgow Climate Pact highlights the importance of partnerships and international collaboration on innovative climate action in order to address the climate emergency.

This includes all actors of society, and specifically recognises the important role of non-Party stakeholders, such as civil society, indigenous peoples, local communities, and youth.

Within this, libraries and other cultural and educational institutions have a strong potential to contribute – both as stakeholders in their own right, and as platforms through which to involve other stakeholders, like youth and local communities.

Just climate action must have a human-rights focus. In this, the Glasgow Climate Pact calls on State Parties (governments) to implement the Glasgow work Programme on Action for Climate Empowerment.

This work programme reaffirms the importance of all six elements of Action for Climate Empowerment, as per Article 6 of the UNFCCC and Article 12 of the Paris Agreement.

These articles stress that education, training, public awareness, public participation, public access to information and international cooperation on climate change are vital to achieving the objectives of these agreements.

Through the Glasgow Work Plan, State Parties also reaffirm the importance of educational and cultural institutions (such as libraries) in ensuring Action for Climate Empowerment. It goes on to encourage States to strengthen the integration of Action for Climate Empowerment into the development and implementation of their national climate policies, plans, strategies and actions.

Libraries must be considered in these strategies, as they are uniquely positioned in communities to involve, include, inform, and empower people to take climate action. This was the key message shared by IFLA during several events on the COP26 agenda. 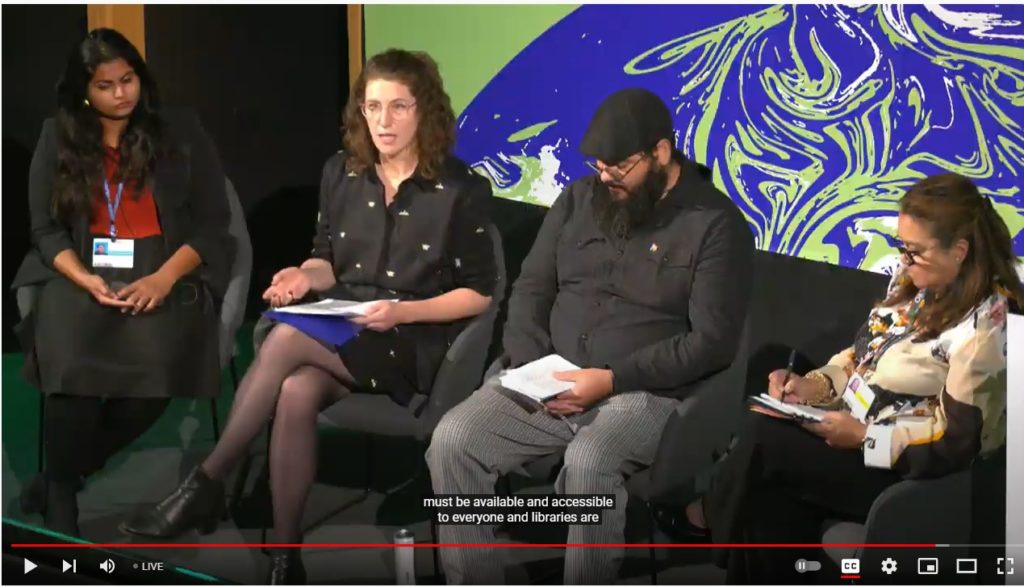 IFLA took part in a range of events during the Conference.

IFLA also joined a roundtable on using culture and cultural institutions to support inclusive, locally-led resilience action. This was an excellent opportunity to highlight some examples drawn from recent winners and runners-up of the IFLA Green Library Awards, and to encourage viewers to explore the Awards further. Watch the recording online here: Communities Tapping Their Shared Cultures and Heritage for Climate Action.

IFLA also joined another excellent line-up of speakers for an EU Side Event in which we highlighted how libraries empower their communities to take climate action. Watch that recording online here: Powering Climate Action Through Heritage Policies, Organisations, Research and Public Programmes.

Libraries around the world continue to be engaged with the Green Library Movement – acting as educators, role models, and platforms through which to allow communities to get involved in climate action.

IFLA will continue to amplify these efforts and seek out ways to keep adding a library voice to international conversations on climate action as we look ahead to COP27 in 2022.

We can also look to the Glasgow Work Programme on Action for Climate Empowerment as an opportunity for advocacy. Looking ahead, there is more that can be done to highlight the essential role that libraries play in promoting the changes in lifestyles, attitudes and behaviours needed to achieve the Paris Agreement.

Together, we can highlight how libraries help state parties uphold their commitments to respecting and promoting their obligations on human rights as they pertain to addressing the climate emergency.

If you have input, feedback, or questions, please do not hesitate to get in touch: claire.mcguire@ifla.org.