IFLA’s Management of Library Associations Section (MLAS) in collaboration with the New Professionals Special Interest Group (NPSIG) is proud to announce the third event in a new webinar series to empower new library leaders worldwide and foster diversity within the profession.

Over the course of six webinars, library associations from countries in each Regional Division will present opportunities they provide for new and senior librarians including leadership opportunities and how these library associations are fostering diversity within the library profession and leadership. The webinar format includes interactive opportunities to engage attendees in conversations about those topics that will elicit best practices and recommendations and the needs of new and senior professionals.

The insights gained from these webinars will then inform and enrich the MLAS Open Session at WLIC 2022 in Dublin, which will focus on the same theme.

We are pleased to feature library associations and librarians from all regions of the world in this webinar series. Our third webinar on May 25 features the MENA region. Time: 6pm Cairo, Amsterdam/ 12pm New York

MENA RDC and members of IFLA MLAS and IFLA GB from MENA have been instrumental in coordinating this webinar from IFLA MLAS and NPSIG. 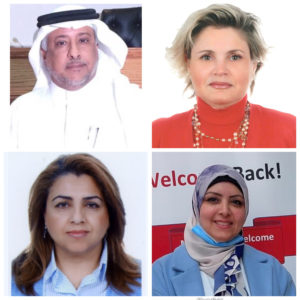 Hassan A. Alsereihy is a Professor of Information Science at King Abdulaziz University and the current president of the Arab Federation for Libraries & Information ( AFLI ). He was the head of the LIS Department and Vice Dean of Library Affaires at King Abdulaziz  University , and was the first general secretary of King Abdulaziz Assembely of Waqf Libraries. He Published 55 research articles,  Co-authored 12 books, and wrote two volumes about Saudi provinces in the Encyclopedia of Saudi Arabia, He was ex-Chief Editor of AFLI’s Journal, and the current chief editor of Journal of information studies & technology.

Randa Al Chidiac is the Vice-President & Public Relations Coordinator for the Lebanese Library Association. She is currently the President of the Blue Shield Lebanese Committee and the Executive Director, Projects and Grants Unit, International Affairs Office, Holy Spirit University of Kaslik, Lebanon. She was appointed as representative of the International Federation of Library Associations and Institutions (IFLA) in the founding committee of the Blue Shield Lebanese Committee. Previously, she served as the Executive Director of the Library at the Holy Spirit University of Kaslik (USEK), Lebanon, and as President of the Lebanese Library Association for two terms. Randa has given over invited talks both at conferences and seminars, as well as a trainer in various topics of the profession. She has a special interest in issues in management, leadership, academic integrity, preservation, and copyright, as well as raising the professional standing of librarians in the region.

Soumaya Yahiaoui, Librarian, Deputy head Director of Collection Development of the National Library of Tunisia since 2016, previously in charge of public services and collections conservation, program and training of the profiles of librarians, coordinator of several round tables on the occasion of the book fair in Tunisia. Master’s degree in Librarianship and holds a Master’s degree in Social and Cultural Anthropology, Activist in Civil Society.

The UNESCO MIL Cities paradigm and the 2030 Agenda: metrics for the cities of the future