A bumpy road towards the protection of rare collection 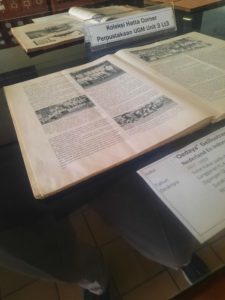 A monumental decision was made in 2006 regarding the maintenance of rare collection of the Indonesia’s late vice president, Mohammad Hatta. Universitas Gadjah Mada (UGM) Library was given the honour to receive thousands of books and other forms of collections and asked to maintain them. Those collection were previously housed in a relatively old library building located not too far from UGM. The rare collections were physically transported from their original building, Hatta Library (Perpustakaan Hatta), and are now housed in a room at UGM Library.

To give some context, Mohammad Hatta, is Indonesia’s first vice president. Together with Soekarno, Hatta, proclaimed Indonesia’s Independence Day on 17 August 1945, 77 years ago. He symbolised a true intellectual, being sharp in his mind, modest in his appearance and full of integrity in his character. Hatta was the mind behind Soekarno’s character of thinking big. He was the one transforming the big ideas of Soekarno into realities. Hatta was a well-read learner and that is the reason behind his extensive book collection.

Yogyakarta is known as the city of students or Kota Pelajar, which might be the reason why Hatta Library was established in Yogyakarta in 1950. Unfortunately, the library faced several issues in management, human resources, and financial matters. A decision was then made to grant most of the collections to UGM Library, being the biggest university in the city. UGM Library is considered to have adequate capacity to house these rare and important collections.

The next step for UGM Library is to determine how to protect and maintain those rare collections. Most of them are old and fragile so they require prompt action for protection. Digitisation is one of the first steps taken by UGM Library in preserving the rare collections. The library has assigned a team to maintain the collection by digitising books using special equipment dedicated to the project. Admittedly, the progress might not be as fast as we desire due to the limited availability of human resources and equipment. Nevertheless, the steps taken by UGM Library clearly head towards preservation of these rare and important collections.

UGM Library believes that these rare collections from Hatta are invaluable treasure for Indonesia. The books preserve knowledge and history on how Indonesia evolved as a nation. By reading these collections, young Indonesians would understand their country better. They can find clearer context on how and why Indonesia became the country they live in today. Hence, preservation of these rare and important collections is essential. What UGM Library is now doing deserve appreciation.

On the other hand, preserving rare collection has always been challenging. Having a good intention and strong initiative are good starts, but it requires a lot more than that. It requires commitment and allocation of resources. Collaboration with relevant parties such as government and private sectors can also be a good way forward. UGM Library is viewing this as an option to explore in the future.