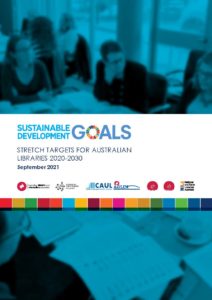 The stretch targets were launched in September, as part of Global Goals Week, and in the lead up to the ALIA SDG Roundtable, taking place online on 1 November 2021.

The targets have taken two years to finalise and have the support of the ALIA Australian Public Library Alliance, the Council of Australian University Librarians, and National and State Libraries Australasia. They also involve Blue Shield Australia and the Australian Libraries and Archives Copyright Coalition.

The targets will be monitored by IRAC and will help track progress across different areas of development, from literacy levels through to engagement with the Asia Pacific region.

IRAC Chair Vicki McDonald said, ‘This work began with an SDG roundtable at ALIA House in September 2019. It was strengthened through consultation with ALIA Members and other peak bodies, and we now have the confirmed targets. If we can achieve these targets for literacy, open access, copyright reform, access to services, cultural respect, climate change, wellbeing, diversity, learning and international engagement, by 2030, we will have made an important contribution to a better future for all Australians.’

Target six in the series is for ALIA to have an open and transparent position on climate change, aligning with SDG 13 ‘take urgent action to combat climate change and its impacts’.

On 13 October, for the International Day of Disaster Risk Reduction, the ALIA Board went on record with a climate change statement and made a commitment for the Association to play its part in reducing damage to the environment, becoming carbon neutral by 2030 and adopting a new Environmental Sustainability Policy, with strategies for minimising ALIA’s impact on the environment and maximising its use of sustainable resources.

The ALIA Board is driven by its statement, recognising that ‘climate change is a dangerous reality and that its effects pose an increasing threat to libraries and the communities they serve.

‘Living in a country that is particularly vulnerable to environmental extremes, it is critical that all Australians have access to the information they need to make informed decisions about climate change and how it affects their lives. Our global goal of net-zero carbon emissions by 2050 can only be met by government, industry and civil society, if leaders have the grass roots support of individuals, families and community groups.’

The statement highlights the work of libraries in promoting awareness of environmental issues, providing access to the latest scientific findings and mitigating the impacts of climate change on the most vulnerable in society. It also summarises ALIA’s actions in this area.

ALIA has been an active member of Blue Shield Australia since 2005, part of the international movement to protect cultural heritage at risk from conflict and disaster. Most recently, in July this year, ALIA initiated the Greening Libraries project, commissioning research into how libraries internationally and in Australia are responding to environmental issues. This will lead to the development of a best practice report in 2022 against which libraries can assess their own performance and set goals for improvement, with further project outputs to follow.