At the 2021 World Library and Information Congress (WLIC), Andrew Potts, coordinator of the Secretariat of the Climate Heritage Network, gave the keynote speech for the Libraries Sustain thematic track of the Congress.

We are happy to share the transcript of his intervention below, so that even more of the field can be inspired, and in particular learn about the Climate Heritage Network and how to get involved, and are grateful to Andrew for his intervention. 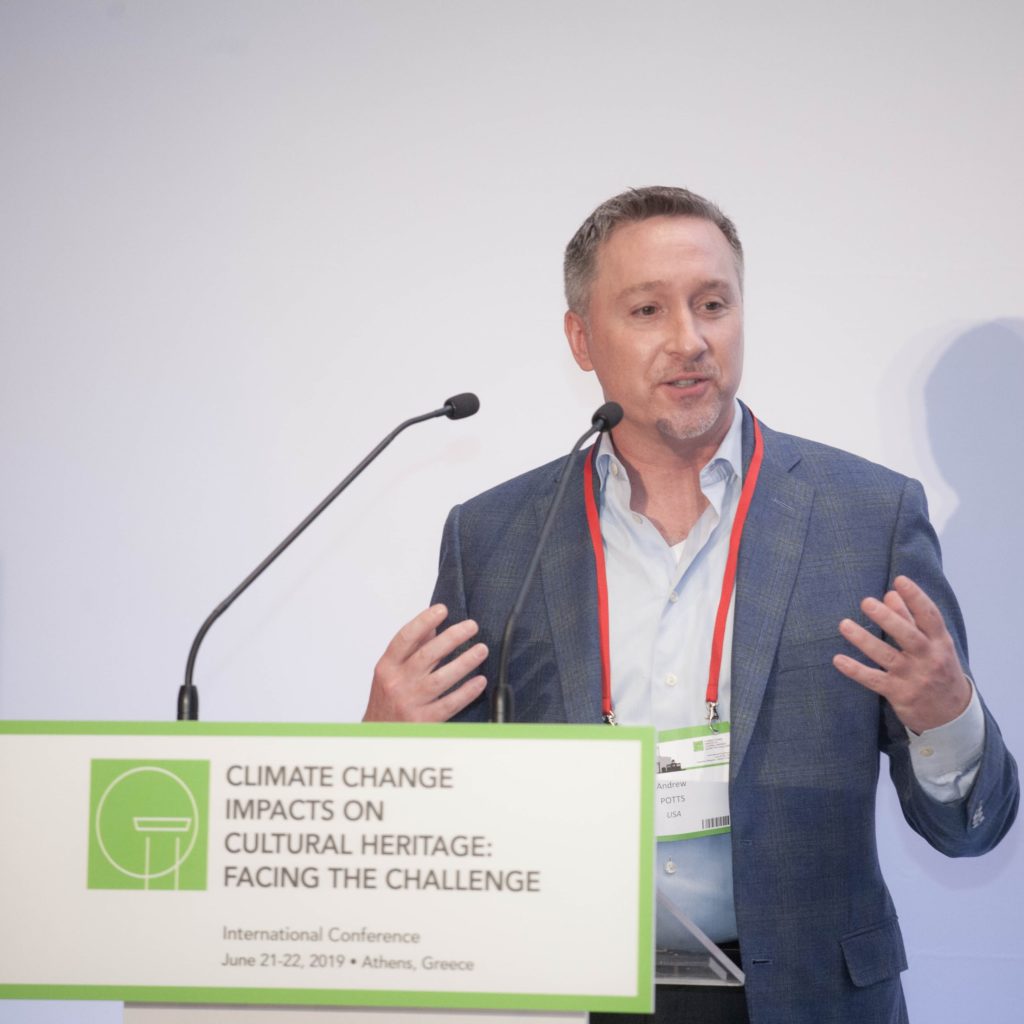 Thank you, Gerald for that very generous introduction and it’s a real pleasure to be with you and with so many friends and colleagues today for this important conference.

As you’ve heard my name is Andrew Potts and I’m the coordinator of the secretariat for the Climate Heritage Network – we call it the CHN. The CHN was launched in 2019 with the goal of foregrounding the cultural dimensions of climate change, scaling up culture-based solutions to climate change, and mobilizing arts, culture, and heritage for Climate Action.

The CHN is a diverse group comprised of government, cultural organizations, businesses, universities, and civil society. We have a number of libraries, archives and other documentary heritage institutions as members, and I’d be remiss if I didn’t invite each of your institutions to consider joining us as well. It’s free and easy to join it’s done entirely online at climateheritage.org.

And here I would also specifically like to thank and congratulate IFLA, because IFLA was one of the founding members of the Climate Heritage Network. And IFLA has consistently worked to sound the alarm for the need for climate action.

And, to be honest, the need for Climate Action has never been greater.

I usually begin my talks with some words aimed at underscoring the urgency of the climate emergency, but no words I could write could do a better job than those contained in the report that Gerald just referred to, the report that was approved last week by the 195 governments that make up the Intergovernmental Panel on Climate Change, the IPCC, which is the world’s leading climate science body.

That report, entitled Climate Change 2021: The Physical Science Basis says that climate scientists are observing changes in the Earth’s climate in every region across the world and in every climate system, that many of the changes observed in the climate are unprecedented in thousands, if not hundreds of thousands of years, and that some of the changes already set in motion, such as sea-level rise are irreversible over hundreds of years.

The report also found, however, that some of the worst impacts of climate change can still be avoided. But doing so will require deep, rapid cuts in greenhouse gas emissions, which, of course, are the causes of anthropogenic climate change.

Specifically, the IPCC has reported that while 1.5 degrees Celsius of global warming over pre-industrial levels will severely damage human and natural systems, including natural and cultural heritage, the impacts of two degrees of warming will be significantly worse. So, I just want to reiterate that point which comes out so clearly from the IPCC report, of the importance of working to try to hold global warming to 1.5 degrees Celsius over pre industrial-levels.

So what does that mean, I mean that’s a quite a diffuse observation, what does that mean for us,  for this audience:  first takeaway I want you to have is that at scale, efforts to mitigate the impacts of climate change have to include aiding in reducing greenhouse gas emissions or so called decarbonisation. So of course we in cultural heritage, heritage, we have to prioritise work to enhance the resilience of our institutions, to protect our collections, to safeguard the documentary heritage that we care for.

But simply put, in many places, those communities will not be able to adapt their way out of the impacts of two degrees of warming; the impacts are too great and every system has a limit to its adaptive capacity.

And so, our work to conserve collections, to safeguard heritage, to aid communities, it has to include an explicit focus on helping communities decarbonise, on helping the world to achieve this goal of holding warming to 1.5 degrees.

The second lesson that I want to underscore from last week’s IPCC report is that the work to limit global warming to 1.5 degrees, the pathways to reducing our emissions to that level, these are fundamentally cultural journeys. The cultural dimensions of this work loom large.

Holding warming to 1.5 degrees is going to be incredibly difficult. Indeed, according to the report released last week, we’ve already warmed the planet 1.1 degrees over pre-industrial levels so we’ve been at this industrial revolution thing for a long time.

The science tells us that holding warming to 1.5 degrees will require change, transformative change, in the way communities build cities grow food, travel; all aspects of society will have to change and these changes are needed rapidly, indeed in this decade, because the window of opportunity to hold warming to 1.5 degrees is closing.

And so what I would like to propose to you, what I would like to suggest to you, is that no society, at least no industrialized society can achieve systems transitions on a nearly unprecedented scale at that speed without attention to the cultural dimensions of these shifts and without capturing the hearts and minds of residents, and so this is where we come in.

Guiding transformative change requires understanding of how humans relate to places and things. It benefits from knowing how humans have responded to pass social and environmental change.

Addressing climate change calls for planning with a multi-generational time horizon and approach that we in the cultural heritage sector, almost uniquely, bring in terms of our efforts to safeguard and conserve culture. Addressing climate change demands circular economy approaches that promote the reuse and conservation of resources and it demands information, creativity and cultural capital.

But the scary thing here is that this choice, this choice not to be a part of the solution is really easy to make, because all it requires is doing things the way we always have done them. It’s business as usual that has given us the climate crisis, and so, how do we opt out of this business usual approach.

The problem is that so many cultural institutions, frankly so many libraries, archives, and museums, many of our colleagues are currently making the choice to behave in a business-as-usual manner. We still have too many government culture agencies, including the ones that manage libraries and archives, that aren’t involved in climate planning for their cities and regions.

Too few national climate plans that don’t sign any role to culture to a few museums and libraries that aren’t messaging about climate change.

Too few facilities and collections managers who don’t know how to downscale a 30-year climate model and incorporate that into their work and too few traditional knowledge bearers and indigenous scientists invited to the climate science table.

So how do we shift this paradigm? What does the other path look like? What does cultural heritage look like when we reject business-as-usual, and orient our work to be a part of the solution to climate change?

This is the reason that the climate heritage network was founded. It aims to answer the questions: how do we increase the ambition of arts culture and heritage communities and institutions to contribute to the work of addressing climate change? How do we convince others like environmental policy makers and climate scientists have the relevance of culture and heritage to their work?

The CHN aims to connect culture and heritage to climate science and policy. Its members have committed to calibrating their work to the targets of the Paris Agreement, which means working to mitigate future climate change by helping communities, reduce their carbon footprint, so that we can hold warming to 1.5 degrees. It means building resilience and helping people to adapt to the climate change we’ve already caused. And importantly it means planning for loss and damage, including loss to cultural resources, because every system has a limit to its adaptive capacity and we’re not going to be able to save everything.

So how is the Climate Heritage Network doing this?

First we’re attempting to build bridges between cultural institutions and cultural operators and the realms of climate science and climate policy. In essence we’re trying to provoke a conversation about culture in the climate world. There’s a cultural dimension to every aspect of climate action, and so this is a big conversation.

To do this, we have eight working groups focused on developing scalable culture-based climate action tools that will help remove barriers to climate action by cultural institutions.

This work is incorporating a lot of great examples drawn from libraries, archives, and other documentary heritage institutions; again I’d like to thank IFLA for their work specifically in this planning, especially the work on communicating about climate change.

Overall, we call this work the Madrid to Glasgow Arts, Culture and Heritage Climate Action Plan. Why do we call it that we call it that? Because we launched this initiative in 2019, at the UN Climate Conference that year, held in Madrid, and we aim to deliver the results at the upcoming UN climate conference, known as COP 26, which is scheduled to be held in the first two weeks of November in Glasgow in the UK.

COP26 has the potential to be a turning point in the planets collective work to tackle climate change and the Climate Heritage Network and its members, and I know that includes IFLA, is committed to making sure that cultural solutions and the cultural dimensions to the climate emergency are not overlooked at COP26.

And I’d like to invite each of your institutions to join us, to make sure your programming on climate change in the run up to COP26 and during COP26, which again is the first two weeks of November of this year.

So much work has been done, these past decades to try to tackle the climate emergency, and yet here we are with the problems still getting worse.

But as I’ve tried to point out, our skills are useful, we have a lot to contribute, so no more business-as-usual for cultural institutions.

Let us as cultural actors, as libraries, as librarians, as archivists, as conservators, as administrators, as knowledge holders make holding global warming below 1.5 degrees an explicit goal of our work.

Let us insist that cultural actors and cultural institutions are included in climate planning and have a seat at the climate action table.

When it comes to tackling the climate emergency, I say count culture and count heritage in!

And I think you will agree that that has to be a defining mission of our work in these coming years and so again, I thank IFLA – thank you  – for putting climate change on the agenda, I thank you for your support in your work on these issues and your engagement with the climate heritage network, and I look forward to working with you more in the future, thank you.