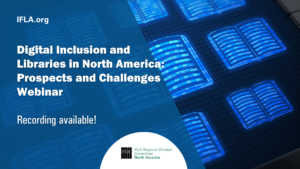 Digital Inclusion is defined as “the ability of individuals and groups to access and use information and communication technologies.” Although some significant progress has been made in the areas of digital inclusion in North America, there is still a long way to go before we can include everyone to be part of the digital world (e.g., more than 1 in 5 Americans still lack broadband internet at home). As the research suggests, public libraries in North America are playing a pivotal role in reducing the digital divide and taking initiatives to improve ICT accessibility among individuals and groups, including newcomers, seniors, and children.

The first presentation by Mark William, CEO of Milton Public Library, offered a quick summary of an interesting and timely virtual reality program for seniors that he and his team implemented at the Milton Public Library in Canada. Mark was inspired by early research on the advantages of virtual reality for older citizens. In his presentation, Mark focused on the potential advantages of virtual reality programs for seniors to prevent isolation and further deterioration of Alzheimer’s.

After Mark’s presentation, Sepideh Mckensy, Project Leader of the Bridge Project, Toronto Public Library, spoke on behalf of the organization and offered a general overview of the project, shared some early findings and outlined its goals. The Bridge Project is an initiative that helps public libraries in Ontario assess the impact of technology services offered. The project, according to Sepideh, “supports libraries to expand the reach of technology services that they deliver to their communities and enables libraries to understand and demonstrate how technology service directly benefits residents, particularly the most marginalized and highest need customers.”

Julie Walker, State Librarian and Associate Vice Chancellor for Libraries, Georgia Public Library Service (GPLS), presented the statewide perspective on digital inclusion in the U.S. State of Georgia. She drew attention to how the Georgia Public Library Service (GPLS) works to distribute resources so that all of its libraries can make use of its programs and services. According to Julia, “All of our libraries and all of their patrons deserve inclusion and equitable and affordable connectivity. We’re keenly aware of the disparity and resources and expertise, So we keep that in mind always as we’re designing our initiatives.”

Finally, Sonia Alcantara-Antoine, CEO of the Baltimore County Public Library and president-elect of the Public Library Association, spoke about Baltimore County Public Library’s progress toward digital equity in her presentation. Need-based technology services are crucial for public libraries, as Sonia emphasized: “Emerging technology is great, and public libraries absolutely have an essential role in providing exposure to and access to emerging technology, but it has to be balanced with addressing the real needs of the community. Yeah, it might be great that you have that 3D printer, or you have that drone, or what have you in your library system, but is that what’s going to help people get a job? Is that what’s going to help somebody graduate from high school?”. Sonia also talked about Baltimore County Public Library’s partnership and initiatives in digital equity.