The Third Meeting of the Network of Parliamentary Libraries for Latin America and the Caribbean was held at the Congress of the Argentine Nation on September 19-21, 2022. Authorities of libraries and information agencies of Argentina, Bolivia, Brazil, Chile, Colombia, Cuba, El Salvador, Ecuador, Guatemala, Mexico, Nicaragua, Paraguay, Peru, Puerto Rico and Uruguay shared experiences and proposals on different activities. The legislatures of the Argentine provinces were also part of the event.

This third meeting was organized by the Library of Congress of the Argentine Nation and supported by three international organizations: The United Nations, IFLA and the OEI (Organization of Ibero-American States for Education, Science and Culture). The Chair of the Joint Administrative Committee of the Library of Congress of the Argentine Nation, National Representative Carlos Américo Selva, opened the meeting with the following remarks: “The Network of Parliamentary Libraries promotes the exchange of experiences and documents among its members to strengthen the work and the representation of citizens by legislators of Latin America and the Caribbean in their respective parliaments”.

Other important presentations were delivered by Jonathan Hernández, member of IFLA’s Governing Board; Luis Scasso, Deputy Director of OEI Argentina; Claudia Mojica, UN Resident Coordinator in Argentina;  Mateo Maciá, Director of Documentation Services, Library and Archives of the House of Deputies of Spain; Matías Sotomayor, Director of International Relations at the National Council for the Coordination of Social Policies, and Coordinator of the SDG Project in Argentina; and Mónica Paz Torres, Secretary of Agreements of the Network of Parliamentary Libraries for Latin America and the Caribbean.

The Network of Parliamentary Libraries for Latin America and the Caribbean was created in 2017 when the Valparaiso Declaration was signed at Santiago de Chile. Alejandro César Santa, General Coordinating Director of the Library of Congress of the Argentine Nation, pointed out that when the Network was created it only had three member-countries, while today it has sixteen, together with the Andes Parliament, which joined the Network as an associate member.  This Network has its own statutes and rules, social media and web page:  www.redbiparlac.org.

Moreover, Diplomas in Parliamentary Libraries Studies were awarded to students of the course jointly delivered by the Library of Congress and the Department of Information Science of the School of Humanities of the National University of Mar del Plata. In this regard, Alejandro Santa stated that this is the first Diploma awarded to parliamentary librarians worldwide, in order to better train our colleagues. In Argentina we are working to support the consolidation of a network of Parliamentary Libraries which is not only limited to communication among members but also focused on professional training. 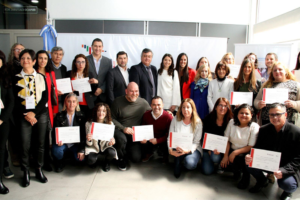 Among the news of regional importance, a Collaboration Agreement was signed between the Library of Congress and the Library and Documentation Center of the National Assembly of People´s Power of Cuba, an institution which was incorporated to the executive secretariat of the Network.

As regards action plans emerging from this initiative –one that encourages a model for collaborative management- a Commitment Agreement of the Federal Network of Parliamentary Libraries of the Argentine Republic was signed at the House of Representatives of the Nation, where the Speaker of the House, National Representative Cecilia Moreau, stated that the role of this library and all libraries is essential to promote access to knowledge areas. She also stressed the importance and value of libraries in the development of culture and peoples.