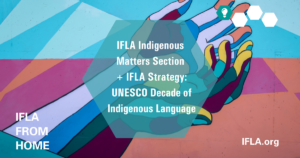 Aligned to the IFLA Strategy’s Key Initiative 1.4, the IFLA Indigenous Matters Section will actively support the UNESCO Decade of Indigenous Languages with projects and events, emphasising the role of libraries in advancing the rights of indigenous peoples to language.

Language is vital to the well-being, cultural practices, and living heritage of Indigenous peoples. However, many Indigenous languages throughout the world are endangered through lack of use or threatened by limits to freedom of expression. The UNESCO Decade of Indigenous Languages (2022-2032) is intended to support and advance the Rights of Indigenous peoples to language, and respond to an urgent need to language protection and revitalization.

The Indigenous Matters Section (IFLA IM) is highly committed to promoting and protecting Indigenous languages, and proposes a three-year project that will focus on building strategic goals that holistically connect the activities of the Section in relation to Indigenous languages to all of IFLA, as well as Indigenous library and cultural organizations, and to other groups, in a holistic fashion. We feel this is a vital activity that is pertinent to all IFLA Units and IFLA itself. Many members of the Unit are already Indigenous language advocates and see language as highly integrated with the work of the Unit and the IFLA as a whole.

In addition to this project, the Indigenous Matters Section, also has the following projects planned for the 2021-2023 term: