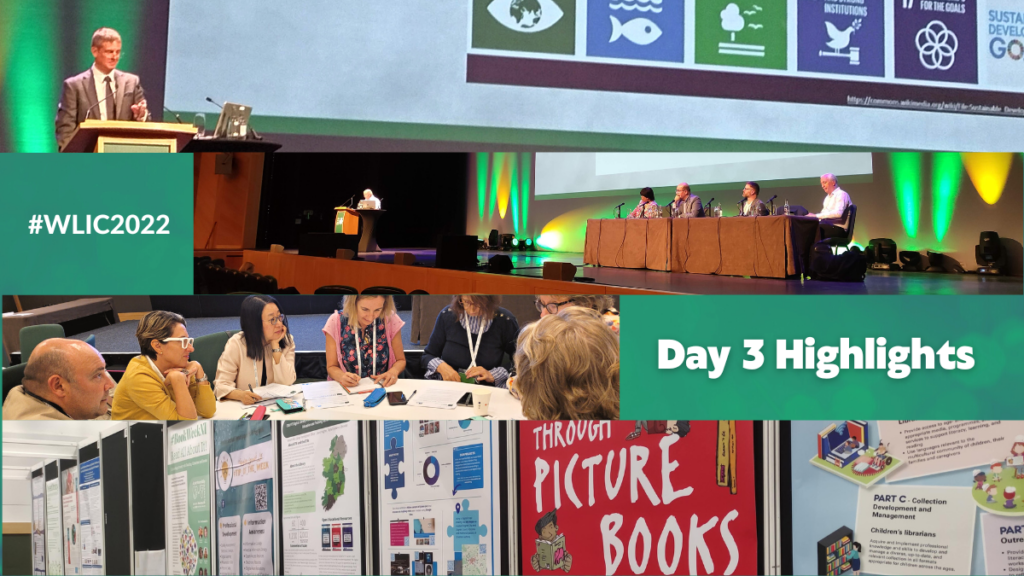 European Libraries in a Time of War: Responses to the Crisis in Ukraine

The very first IFLA Europe Regional Division (EURDC) session focused on how libraries and library associations can support colleagues in Ukraine. EURDC Chair, Stuart Hamilton introduced the work of the EURDC and its committee members. In an incredibly powerful and moving speech, Oksana Boiarynova spoke about the impact of the conflict in Ukraine so far. Delegates held a moment’s silence for all those who had lost their lives due to the war.

Oksana reported that over 60 libraries have been destroyed as today (28 July) – the 155th day of the conflict, with hundreds more damaged.

A special fund has been set up by the Ukrainian Librarian Association to give financial aid to librarians – over $10,000 has been raised thus far. Donations can be made through a special website.

Oksana pointed out that the war in Ukraine is partly a war of misinformation which the Ukrainian Library Association (ULA) is working with its partners to combat this. The ULA is also helping those displaced by the war, offering resources, training, and services to help those displaced by the conflict, especially children.

Ismet Ovčina from the University of Bosnia and Herzegovina, who had seen so much damage and destruction in his own country, asked simply “Why again?”.

Ton van Vimmeren from EBLIDA talked about the importance of those in other countries not looking away from what is happening in Ukraine. He spoke about EBLIDA’s efforts to support refugees displaced from Ukraine and put a call out to all delegates to get in touch with them about how to help. The session was followed by some provocative debate during a highly pertinent Q&A session.

Moving and inspiring in equal measure- now hearing from Oksana from the Ukrainian Library Association about the realities of providing library services during the war. #WLIC2022 pic.twitter.com/ZCQnWEgL1X

PAC Centres in the Learning Zone: Interactive Exploration of Preservation and Conservation Techniques 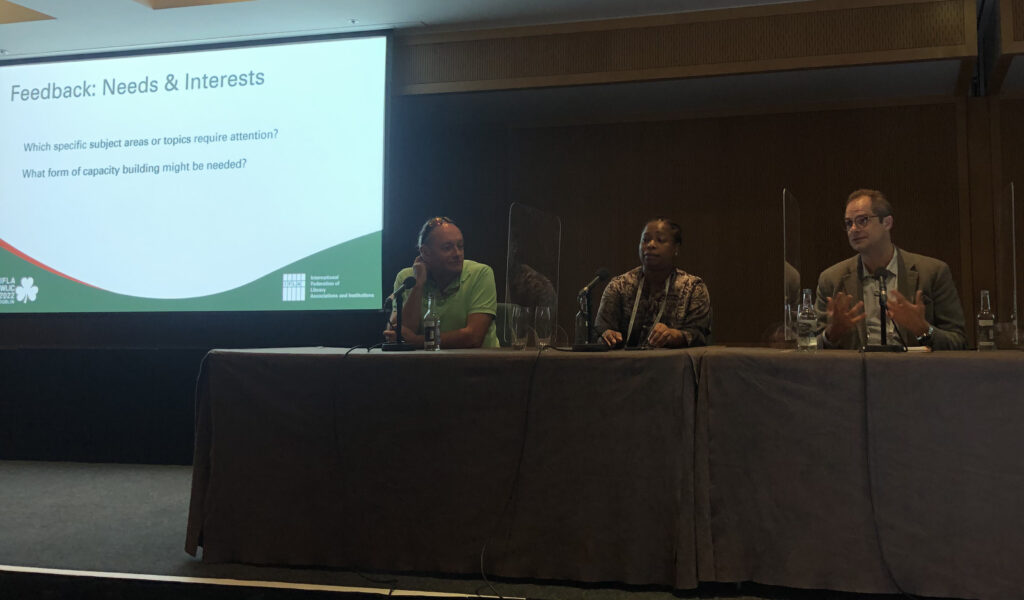 At this session, IFLA Policy and Research Officer Claire McGuire talked attendants through the objectives, structure and everyday work of IFLA’s Preservation and Conservation Centres (PAC) before handing over to directors from Qatar, South Africa and the United States to describe their individual experience as hubs of knowledge on regional and international PAC issues.

Participants highlighted the regional and cultural nuances which can affect their work and, in discussions with the audience, emphasised the deep need to collaborate with other bodies such as museums, archives and educational institutions to ensure the preservation and conservation of important and valuable collections.

Audience members also contributed to the discussion with remarks on the importance of good cataloging and metadata standards in the mitigation of potential damage or loss to materials. 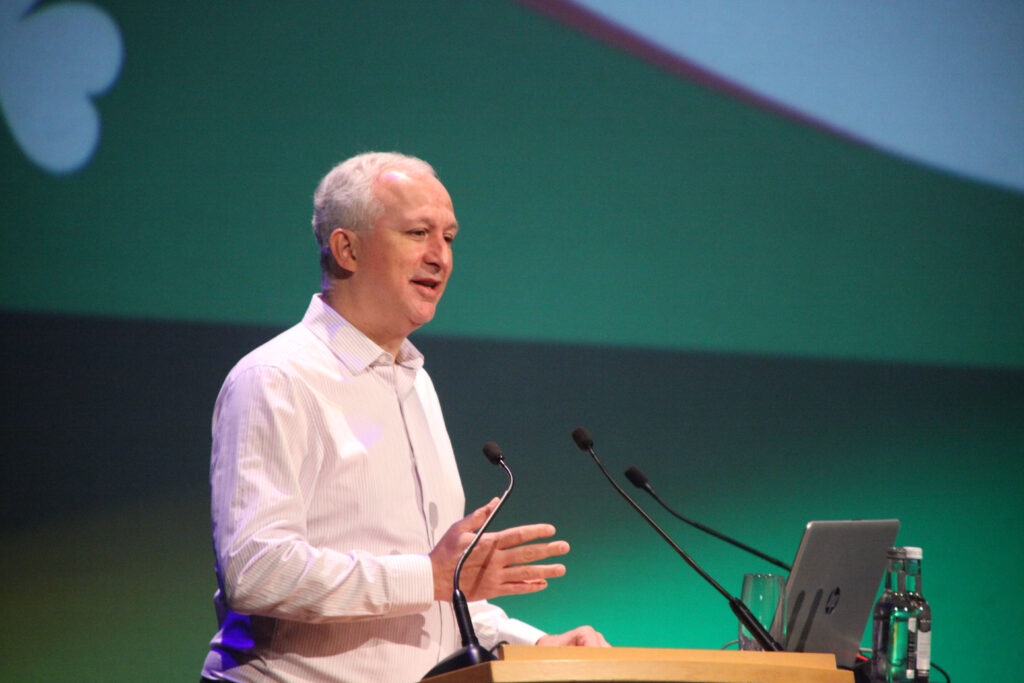 Libraries bring a unique set of strengths to the table, but are too often left to plan and operate alone. This is to miss the opportunity to create new partnerships with other actors, to extend our reach, to improve our impact, and in particular to amplify our voices.

The “Connect to Deliver” session provided a platform to hear from leading figures in civil society in sectors close to libraries’ missions – better governance, sustainable development and citizenship education – about the potential to form new connections, and to build up your own ideas about how to implement these at home. Speakers at the session included Frank Geary, Irish Development Education Association (IDEA), David Banisar, ARTICLE 19, and Deirdre de Burca, For Us.

A Laboratory of Ideas: 75 Years of Partnership with UNESCO

2022 marks the 75th Anniversary of IFLA’s partnership with UNESCO. This occasion presented an opportunity to revisit the history of our relationship and envision future collaboration in a special session on Thursday.

This special session was not just a reflection on the past, but a call to action for the future!

The most discussed statistic from the poster sessions was a little unexpected. 71% of French librarians recognise themselves as cat people.

Best poster @ifla @iflawlic A very worthy winner and a married couple 👏👏👏😍😍😍 Surely the Cat one deserved some kind of special award for most engaging/most talked about? 😂#WLIC2022 pic.twitter.com/DV3etae6Sx

In his provocative and inspiring keynote “How millions of bold librarians will help save the world by inventing a unique new form of global activism in response to the climate crisis,” cultural strategist and digital pioneer Michael Peter Edson drew on 25 years of work in the library and museum sector to argue that an updated concept of librarianship is needed if we are to answer today’s most important questions about culture, society, and change.

Peter Edson argued that we must not forget about play, right-brain thinking and conviviality when looking for solutions to difficult challenges. He also asserted that choices and commitment to take action is an effective way to accelerate growth and learning while reminding attendees of some familiar and knowable patterns and obstacles to change, especially where crisis circumstances are concerned.

The session took a closer look at developments and corresponding library responses aiming to meaningfully deliver on the rights codified in Article 19 of the Universal Declaration of Human Rights (“Everyone has the right to freedom of opinion and expression…”) and its interactions with other key fundamental rights.

The effects of the pandemic on library and information access services – and solution-based initiatives – were discussed, along with the impact of national and international political issues and crises on librarians, libraries, and access to information; and censorship, manipulation of information, misinformation, and information pollution. The session was an interactive event in which the participants contributed their opinions, questions, and discussion following the speaker panel’s presentations.

Everyone has the right to freedom of opinion and expression; this right includes freedom to hold opinions without interference and to seek, receive and impart information and ideas through any media and regardless of frontiers. #WLIC2022

Many wonderful entries were received and reviewed by our volunteer communications assistants. It was a delight to see the many ways in which this year’s delegates were inspired and moved by Congress proceedings this year.

Amongst the highlights of WLIC 2022, there was an ever-present focus on having the opportunity to connect with library and information professionals from all over the world. Our People of IFLA portraits and short interviews give a little bit of insight into just some of these faces. 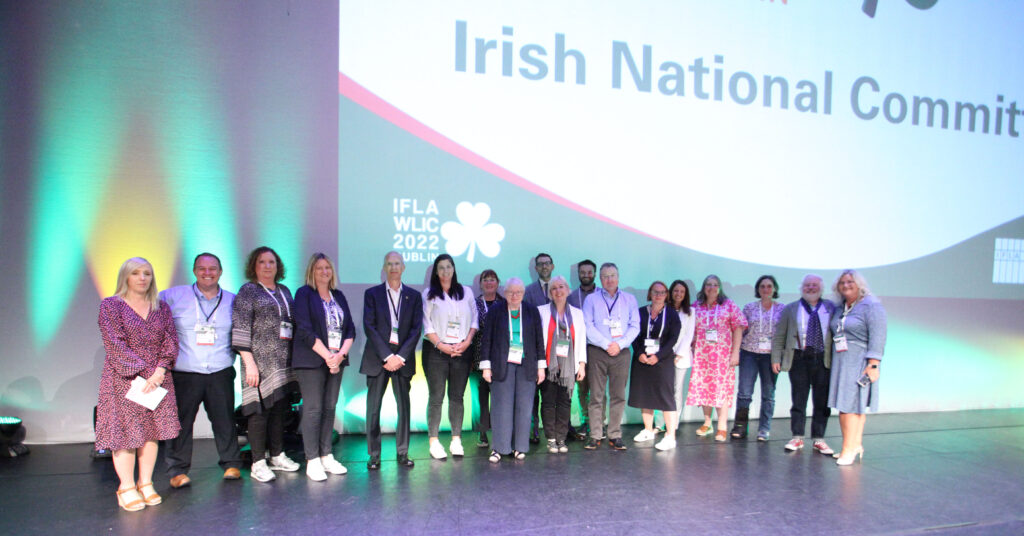 During the Closing Session, IFLA President Barbara Lison spoke about the importance of building a sustainable federation by focussing on the future whilst also creating infrastructure which supports emerging leaders and new ideas to thrive.

Lison outlined her responsibility to ensure that IFLA is a name that continues to hold a great reputation by regaining trust, ensuring transparency and continuing the governance journey responsibly.

A strong focus on transparency will involve more difficult discussions as well as working hard – together – under the IFLA banner to strengthen and unite the field.

President Lison and Vice-Chair of the IFLA Professional Council, Jan Richards, then conferred the 2022 honours and awards.

The Irish National Committee took the stage to immerse delegates in Irish hospitality and languages for one final time, and to hand the baton to their colleagues from Rotterdam as they prepare for the 88th WLIC conference in Rotterdam in 2023!

“Three years ago, on stage like this, the Irish National Organising Committee promised you a fantastic World Library & Information Congress in 2020. It just took us a little longer than we originally planned. Like we’ve done many times throughout the organisation of this Congress, the national committee bandied together and said “sure, it’ll be grand”, and we kept going. We like to keep our promises around here. I think we can now definitively say: Tá sé deanta! We did it!”