Libraries Engage at the Asia-Pacific Forum on Sustainable Development

The IFLA Asia Oceania Regional Division Committee (IFLA AO RDC) participated at the 9th Asia-Pacific Forum on Sustainable Development, which was organised by the UN Economic and Social Commission for Asia and the Pacific (UN ESCAP) and took place in a hybrid mode – in Bangkok and online –  on 28-31 March. The IFLA AO RDC sent Dr Premila Gamage and Dr B. Shadrach as representatives to the physical meeting, and also organised the webinar “Informed societies at the foundation of a better post-COVID world” as one of the Forum’s side events. 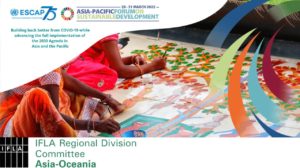 Roundtables on SDGs at the Asia-Pacific Forum on Sustainable Development 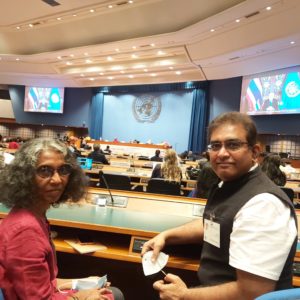 The goal of IFLA’s participation was to discuss how the library community in the region is helping – or could help – countries achieve the Sustainable Development Goals (SDGs), advocating for this role with governments and UN officials.

Reflecting the emphasis in the SDGs on cooperation, they also worked to showcase experiences from the region of partnerships between libraries and other sectors which further the SDG agenda. This report, on which Premila and Shaddy led, gives an overview of what they learned and contributed. We are grateful to them for their work!

SDG 17: Partnership for the goals 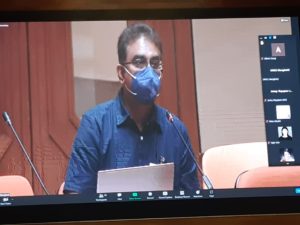 First, taking part in the roundtable that discussed progress on SDG 17, IFLA’s representatives highlighted the role of transnational, national, and local partnerships for achieving the SDGs.

The partnership model of the Skills Online program was highlighted in particular. Initiated by the Commonwealth of Learning, a multi-stakeholder-based model of skilling/reskilling Sri Lankan citizens through the use of public libraries was initiated by the National Library of Sri Lanka during the COVID-19 Pandemic in collaboration with other ministries, local NGOs and community organisations.

Libraries provided the much-required broadband connectivity, as well as access to resources, such as learning modular courses for employability offered by Coursera, Udemy and Google. Libraries also served to provide mentorship support, as well as actively recruiting and motivating citizens to take advantage of the program.

Some 20,000 citizens have enrolled in the program thus far, with more than 5000 of them completing a course or two, leading to employment and entrepreneurship. This library-engineered partnership model was well taken by the participants at the roundtable on 17 that discussed the importance of partnerships for achieving the SDGs.

During the round table on SDG4, IFLA participants highlighted that during the COVID-19 Pandemic, despite the closure of schools for over a prolonged period in the Asia-Pacific, libraries kept the doors of learning open in many countries; thus, supported the learning agenda without fail. The representatives also highlighted the need for promoting vocational education online as witnessed in a few countries. Public libraries, they stressed, can play a critical role in providing access to online courses for citizens.

Achieve gender equality and empower all women and girls

At the round table on SDG5, while praising the efforts undertaken by countries, such as Mongolia, whose Minister was present at the meeting, IFLA representatives called for enhancing female labour force participation via using libraries to improve their skills and to promote the skills aimed at them. They also called for the need to promote high-end skills among women and girls, especially for their participation in the fourth industrial revolution, and stressed that libraries provided a safe space for them to learn collaboratively and engage in gaining micro-credentials, leading to their employment and entrepreneurship, as witnessed in Thailand, Malaysia, and a few other countries in the region.

IFLA’s AO RDC Side event – Webinar: Informed societies at the foundation of a better post-COVID world

During the Forum, a side event was organised by IFLA AO RDC on the 30th of March 2022 on the topic, “Informed societies at the foundation of a better post-COVID world”. IFLA’s representatives on the ground were kindly hosted in the UN ESCAP library for this event. 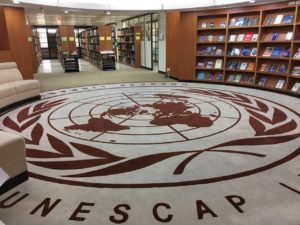 Seven speakers across the region shared their experiences about how partnerships between libraries and other sectors can further support economic and social development of communities, especially focusing on SDGs 4, 5 and 17 which were under review at the Forum. 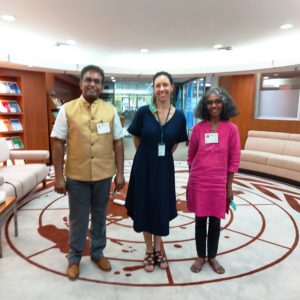 After the opening welcome note by Winston Roberts, Chair of IFLA’s AO RDC, Basheerhamad Shadrach, Dr B. Shadrach, Founder of Indian Public Library Movement and the South Asian Chapter of International Emerging Library Innovators (INELI) program moderated the whole discussion. He opened up the discussion, by providing an introductory note, highlighting the key statistics from the region on the achievement of SDGs. He pointed out that barring a few, a majority of the 169 targets were not met, and in certain targets, there has been regression in the last couple of years, due to COVID-19 Pandemic. He urged libraries to respond to these crises, whether the learning crisis or the climate crisis or the lack of capacity to provide affordable, equitable and quality education and skills for the citizens. He highlighted the role of libraries as public access centres for providing access to broadband, technology, educational resources, learning material, training opportunities, and the collaborative space for learning. 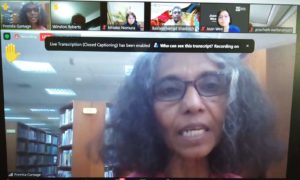 Premila Gamage, member of IFLA’s AO RDC, in her keynote outlined how IFLA had been involved in developing the 2030 Agenda, advocating for libraries and the role played by the IFLA Regional Division of Asia and Oceania towards 2030. She shared the experience of ‘Skills Online Sri Lanka’ programme initiated by the National library of Sri Lanka together with Commonwealth of Learning, Canada and its partners, with the local ones having contributed towards SDGs 4, 5, 8, 10, 17.

Elvira Lapuz, also a member of IFLA’s AO RDC, University Librarian at the University of the Philippines (Diliman), focusing on SDG 4 highlighted the role of academic libraries in providing access to learning material, and their role as champions to close the gender divide in society. She highlighted the role of Philippine libraries in promoting programs designed to meet the needs of women and girls, including their rights to education, health, public services, business skills and their participation in democratic processes.

Misako Nomura, also a member of IFLA’s AO RDC, Board Member of Assistive Technology Development Organization (ATDO) in Japan, presented the role of libraries, from her own experience, including the excluded and the most marginalized such as those the ones related to print disabilities. She advocated for the role of libraries in living up to the Marrakesh agreement and open the door of learning for visually challenged and other physically challenged people with access to learning material.

She also highlighted the role of libraries in achieving SDG 4.6 that promotes universal literacy among children with print disabilities following the concept ‘leave no one behind’. She urged libraries to provide reading material in alternative formats and comply with accessibility requirements and for using technological efforts such as DAISY.

Trish Hepworth, Policy and Education Director at the Australian Library and Information Association (ALIA) in Canberra, Australia highlighted the role of libraries in promoting soft skills and life skills among citizens and spoke from the Australian experience of developing a baseline for all SDGs and monitoring the progress of SDGs through services provided in libraries.

She volunteered to share the Australian model of libraries’ involvement in SDGs through constant consultation and learning with the community. She also highlighted the strong focus on SDG 4.6 (early literacy, digital and media literacy); 4.7 (cultural information collections and access to first nations, diverse collection to support refugees and asylum seekers); and SDG 4 in supporting the lifelong learning needs of citizens as well as the library staff.

Andy Fenton, Director of NZ Micrographics in Wellington, New Zealand highlighted his experience from a special project, Clutha District Libraries’ Digihub project, where local partnerships helped preserve local culture and heritage. Again, he highlighted the role of libraries in the preservation of national heritage and documenting it for the use of future generations. 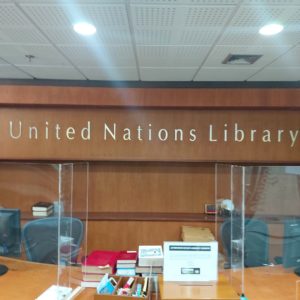 Joan Wee, University Librarian at the Singapore Institute of Technology (SIT) spoke on the role of libraries in developing short courses that would provide 21st century skills to citizens needing them to survive in the 21st century marketplace. Working with the faculty, she highlighted the role of SIT library in developing courses to enhance soft skills and life skills through appropriate pedagogies to engage students and the faculty members. Ms Wee also highlighted the efforts of Singapore Library Board’s Schools project and LearnX program. She spoke about the Polymall and Digital Life projects of Singapore Polytechnic libraries and SIT’s project of promoting transferable skills among students. 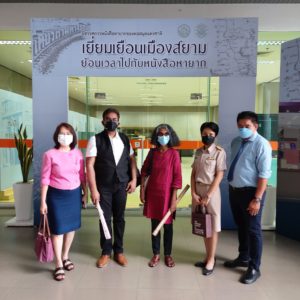 “In person participation at the APFSD provided us an excellent opportunity to meet with the Thai Library Association (TLA), where IFLA’s Asia and Oceania Regional Office was housed from 1989 to 2003. A joint meeting with the Director of the National Library of Thailand and the President, Secretary of TLA and Director and staff was held on the 28th of March at the National Library.

During this meeting we walked them through IFLA’s new governance structure, its advocacy, Memberships and how the TLA, NL and librarians could get involved in the activities of the Regional Division and other professional units of IFLA.

This meeting allowed us to renew and strengthen IFLA’s relationship with both organisations. TLA became an IFLA associate member in 1961 and since then is actively involved in IFLA activities.”

Information and Communication Technology for Development and Disaster Management, ESCAP

IFLA representatives, while physically being present at ESCAP, took advantage of the opportunity and requested a meeting with Ms Tiziana Bonapace, the Director of Information and Communication Technology (ICT) and Disaster Reduction Division. Due to her engagement at APFSD, she deputed her divisional chief, Mr Tae Hyyng Kim for the meeting. IFLA representatives introduced IFLA’s work, especially the work towards advocating at the UN for affordable and meaningful access to broadband technologies. They also highlighted the trend report and the map of libraries among the various initiatives of IFLA and its regional division in Asia-Oceania. Mr Kim suggested that IFLA could join the group that looks into Asia-Pacific Information Superhighway project, especially in its strategic pillar 3 that relates to developing digital skills among the citizens of Asia-Pacific. Mr Kim invited the regional division to stay in touch and attend their ministerial and other meetings being held in Korea and Thailand in the coming months.